One of the special joys of having a Picasa account is having all of your photos automatically move into the cloud.  The automagic part of that is, often times mystery photos appear. I do not know this man (not that I wouldn't want to for any reason) nor do I recall having seen this photo before. I found him in my account, looking for the photo of my dad and me.

He's not part of the Buck Family, but maybe he's heard about what an awesome family we have and is trying to finagle his way in.... Can't blame him for that.

Then there's this guy.  Perhaps the nicest, most generous, clever, handy and all round wonderful man I've ever met.  Considering he is my dad, that makes me one of the two luckiest daughters ever. This was us on his 84th birthday.  I treasure him beyond measure and try to spend as much time with him as I can while I am still able to. A little over a year has past since this photo was taken, and without my mom by his side, he's been stuck with his two daughters.  I hope he feels as lucky as we do. 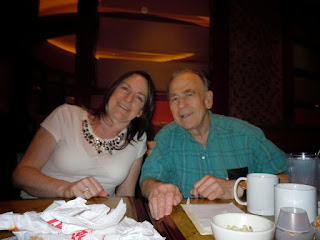 Posted by The Buck Family at 9:53 AM No comments:

In the blink of an eye, your world can change.

I have been something of a Ludite when it comes to possessing/using a smartphone.  I have finally succumbed. I have a hand me down but I still refuse to buy a data package.  It's not that I don't see the utility of it, I just see the obsession with it and I do not want to be "that person" who is constantly checking their phone, despite the fact that they have real humans all around them.

Well, last week, in the matter of one hour I got three important texts: "I am going to need radiation, they upped my staging..." "I'm taking Dad to the hospital, he has a really high fever...." "My brother's at 10 hrs in a 12 hour surgery..."   These were all immediate family members.  Number one just wanted to be alone and process the news, number two was being taken to the same hospital as number 3.  Wow. Ultimately, all is well with all three.  Another bullet dodged.

My life is no more or less stressful than anyone elses.  It's just life. My son and I were discussing the use of robots in battle.  Apparently something they are doing now, along with drones.  My response was "Fantastic' no more 18 year olds dying.  His take was different and most likely more accuratel.  "Mom, if people don't die in battle, there is no value to it.  It's the human element that makes it so effective"  Yes, son, it is the human element that makes everything of importance, important.

Life is very short; whether it's 1 yr, 30 yrs. or 85.   We only have a limited time to get our "work" done.  There's no room for hate, judging, sniping, killing, bigotry, etc.  Everyday is an opportunity to make a change, big or small.  Once you know better, you do better. The other day I was at the pool with my 4 yr old grand nephew throwing little weighted sharks in the pool for him to dive and bring back to me. After two attempts to toss (they just kept landing at my feet), he picked it up and handing it back to me said, try again....each time you try, you'll get a little better. 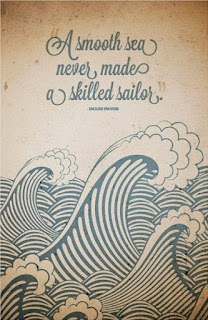 Posted by The Buck Family at 9:55 AM No comments: I have been remiss..........One of my most exciting and proud moments has occurred and I have not bragged blogged about it.  My youngest son, Morgan has achieved a Masters in Fine Arts degree. He's been going to school for 25 years and is finally through.  Now the real work begins.  He is a gifted painter and would love to be a gallery artist, but will need to land a job, preferably teaching art, to get him through the starving artist period.  His work is pretty amazing but definitely not for everybody.

He began his graduate school shortly after his brother was diagnosed with terminal cancer.  He chose to attend a local art school so he  could spend as much time with Alex as he was able to. Many bittersweet memories made during that time. Taking a small break from his studies after Alex died, Morgan dove back into school with renewed motivation. I can't imagine how hard it was for him to continue on, but he did. One of his thesis paintings was on the cover of a couple of publications and he sold one piece at the exhibit.
...and did I mention he graduated magna cum laude.

Much love and congratulations Son!  You've earned everything you've gotten through your hard work, determination and incredible talent. 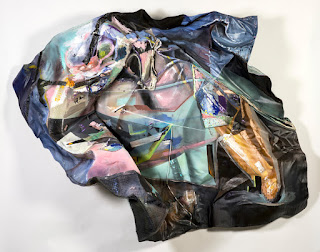 morganbuck.net
Posted by The Buck Family at 8:34 PM No comments:

I walked out into my garage earlier today and this wonderful memory flooded my brain......

The boys were about 4/5 or 5/6.  Apparently, Rod had been out of town and since I was the only adult in the house, I had locked the door between the garage and the house.  You know, for safety.  The next day, the boys were ensconced in front of the tv and I scurried about the house doing chores.  At some point, running garbage or recycling out to the garage, the door shut behind me.  Well, I was now locked out of the house with my two little guys inside alone.  I opened the big garage door, went to the front door and rang the bell. No response.  I pounded on the door, no response.  Back in the garage, I pounded on the wall shared by the garage and the family room (where the boys were).  Again, no response.  I was starting to get a wee bit concerned.  Keep in mind, this was before the days of the ubiquitous cell phone.  Hmmm, what was I going to do.  It occurred to me the reason the boys weren't paying attention was because they were completely mesmerized by the television.  Well, what is on the wall of my garage but the breaker box.  Opening it up, I read the labels. Sure enough, one marked Family Room.  Off it went.  As if on cue, I hear, "What happened?" "Oh, no" "MOM!!!!!"  Pitter patter of little feet looking for me, the garage door opens.  I flipped the switch back to on, unlock the door and go about my day......

Necessity is the "Mother" of invention.

Posted by The Buck Family at 8:31 PM No comments: 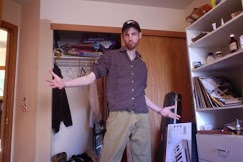 He's missed his last two birthdays with us. Last year as a family, Rod, Morgan and I isolated ourselves, spread ashes and toasted with Jack Daniels. One year has come and gone. I would have liked to have celebrated in some way, but last night I was up for 22 hours with my 85 year old dad, in the emergency room. They finally admitted him at 3 am and I went home to bed. He has a very severe case of pneumonia and will be in the hospital for a couple of days.He is already so much better and should have a complete recovery. After a couple of hours of sleep, I got up to get ready to back to the hospital. My thoughts were on Alex, and it being his birthday.  Such mixed emotions.
Blessed to have been able to call such an awesome guy my son, Blessed that my dad will be spending more time on this planet with us. Blessed that I have such understanding co-workers who allow me to put my family first, and pick up the slack for me. Even blessed that my crazy cat came into the shower with me and stayed till I was done.
Missing Alex, remembering 31 years ago, the excitement over his pending birth and how our lives would change when we became parents. I will never forget how he felt the first time I held him, literally grabbing him from the doctor, hearing his crying as he took his first breath. I will also never forget how he felt as I held him just after he took his last breath.  Both memories will be cherished forever, one so joyful it's beyond comprehension, the other such heartache it is beyond comprehension.
One of my favorite sayings is "Life is slippery. Here, hold my hand."  Relationships are what make our lives joyful, loving, happy and full. Invariably, sadness is a part of those relationships.
Posted by The Buck Family at 8:51 PM No comments: